(It took me a while to write about this)

It was a sold out night at the Northcote Social Club, and stinking hot in the band room while outside was sweat the cool. Why, maybe the aircon wasn't working? But it always happens at this venue.

Did miss out on Bianca Natasha but you can listen to some of her stuff at her space.


Institut Polaire from Perth was very enthusiastic, maybe its a new band syndrome 'Fantastic to be here'. But still you want a band to perform not just play, and performed they did. Great sound for a big band with plenty of stuff going on, loved the trumpet and violen.

The crowd were fairly pumped to see camera obscura, including some people up the front that were going crazy to every song they played. 'Lets get out of this country' was on my Top album list for 2006, so I went into this gig with high expectations. They didn't perform they played but stood there looking very disinterested with being there, a lackluster performance. Although I did enjoy 'Lloyd, I'm ready to be heartbroken' and the soul stomper 'If looks could Kill'. And I don't want to hear the 'they just got off the plane from Glasgow' no when your on stage perform, or my hard earned cash is going to waste. Well there the old man rant for the day. 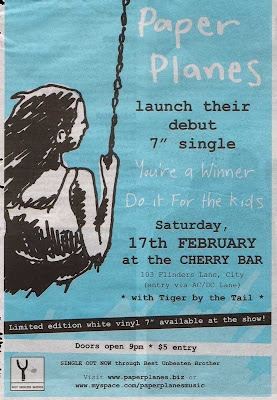 Was on a date with a lady, finding something to do, and endered up here. Cheap night $5 that's 1990's prices. Cherry was a good place for a gig, nice and intimate. Band was rock, remimded me of a few bands one Rival School, others have escaped me. Didn't see Tiger by the Tail due to my date falling asleep on me or was it that awkward kiss I tried to give her. 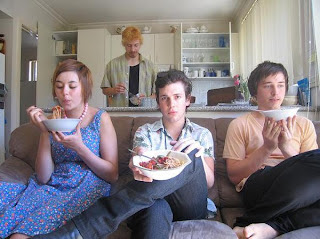 Oh Mercy Melbourne based group, singing songwriting 4 peice. Maybe this song is writen about Melbourne. On My Space there some cover art of Flinders Street Station. Also found this on the Triple J Unearthed website, which they have three tracks up (including this one). Also appearing at the Wintergarden Room in the Exford Hotel this Sat Feb 17 2007, which I still haven't been to yet.

The Breadmakers started off with 60's garage rock sound. But the whole night was a very rock n punk event. The best part about this event was that all bands were playing in the pit, so it gave that intimate feeling, and yes people were on the stage. After going outside and having a drink with a friend to find out he couldn't get in due to a sold out gig, I ventured back in to find the place heaving with the Sailors rude ass madness. Also amazed a the Following of Eddy Current Suppression Ring, so many different shapes and forms comming to see this band. The night gave me some reassurance in Australian Music and Rock.

Eddy Current Suppression Ring - Get Up Morning from 7"

The Sailors - Finding My Match from Viva La Beaver

Something for that special one... 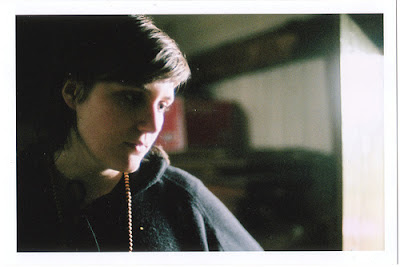 ... or not. Valentines day, nah, don't get into it... maybe its because I'm single. But here's some tunes from Laura Jean(another Melbourne Artist). Tracks are from Our Swan Song on Unstable Ape Records.

I'm A Rabbit, I'm A Fox
Alone In The Valley 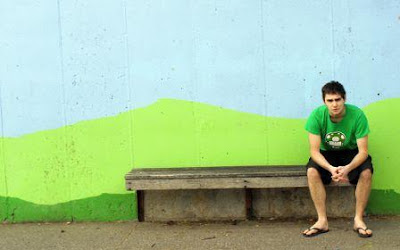 Muscles - Iced cream from Hyperpop! One

Julian Nation - Press Gang Kids from We are all writers

Do you know where all the cool indie Kids hang out, well I just found out, it’s Click Click. After having a afternoon nap, decided to check out a couple of bands. I think the price was $14, which was a bit steep, maybe if you stay all night. But I was just there to see the Bands.

On the menu was Muscles (solo from ), Julian Nation and Popolice. Popolice played first, one stranger said ‘hey, they look like they are bored’. Then Julian Nation came on stage, well I believe it was him. All the bands for the night played short sets, which was a little disappointing.

For about 15minutes Muscles play with a group of other artists, which was there first time playing together, was a very on the spot. This was loud and interesting, but then after that went into his standard Indie Electronic sounds.

Saturday Pony after 2am.
After a booze filled night, bad jokes, bad Borat impersonations, ogling girls, a mate and I headed to See Czech band Sabot fuelled with only a oily rag.

There an Instrumental bass and drum duo, reminded me of a few bands Melvins being one. Had a very fuzz rock, stoner, punk sound. My favourite was a fantastic rendition of These are my favourite things from the Sound of Music.

Couldn't find any decent mp3, but this one would give you an Idea: Not Lonely Anymore - From Doing It Ourselves ( 2005) 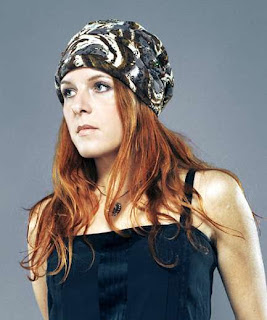 Note this if I'm wrong, but Neko is Japanese for Cat. But Neko is also Beautiful. Some sweat sounds were sung on this great evening. Spanish Club is too bad either, nice and cool. This was her Second show announce that played before the first show..... The crowd was an older type, different from the Indie kids that came out to see the new pornographers on December 2006. Also note: 1. Do note keep a kebab before gigs 2. Find a girl as nice as Neko.

Also check this video out Ms. Lefevre from Maow, Neko Case is playing the drums way back in 1996.