Completely forgot to post this one before today, I was thinking it was on Sunday, and as it's free, will probably have a look. 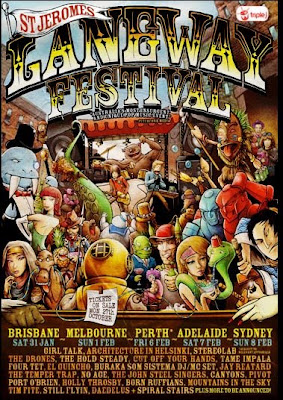 Here is the first announced lineup for the St Jerome's Laneway Festival 2009. For the record I wont go as it's small cramped place where you have to hang around with people trying to be cool or should I say people who are there to been seen. I don't know what the other Cities are like with the Laneway festival, but no I wont go, even if I did get some free tickets. Although will be checking the lineup for sideshows and some of the acts I would like to see. 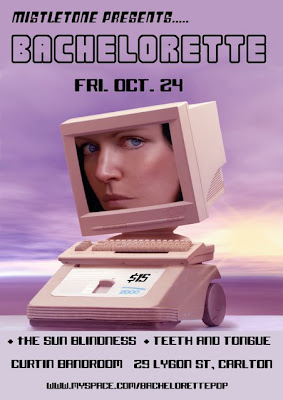 Remember that 80's flick Electric Dreams? This so reminds me of that film, although The Sun Blindness is more guitar than Eighties Synth, Bachelorette(from NZ) is very Pop.Synth, so that wont disappoint. And Tongue and Teeth(from here Melbourne Town) from what I've herd is very mellow guitar work with some smooth female vocals(don't listen to this as I am very inacurate).

All this post is a reminder to get out and see some music. 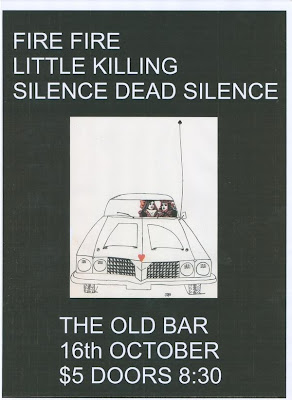 I think SDS started playing first, who I gather are a new act, four piece from Melbourne. I quickly came to a conclusion they were Grunge, not really punk or rock. But an Epic Experimental Grunge. The first song they played was a great instrumental, but I thought the singing wasn't too polished.

When I first heard the above track I thought of Frans Ferdinand but they list some of there influences on there MySpace as At the drive-in, The Killers, The Strokes and Interpol, and could even here a tad of Joy Division. Unfortunately I only got to here a couple of songs by Fire Fire! and then had to leave, so I also missed out on Little Killing. 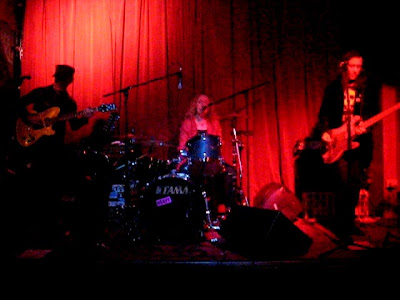 Dave Graney & The Lurid Yellow Mist at Ya Ya's Saturday 11 of October. Free.

I ventured down to Ya Ya's on Saturday to see a free double set by Dave Graney & The Lurid Yellow Mist, (with only Dave, Clare More & Bassist).

I liked the venue with its high ceilings. Also Got me thinking that there are a few venues around that area of Smith Street in Collingwood. The crowd was fairly mix with people mostly over 25 years. Only thing that annoying was the punters consistent chatter while they were playing.

They mixed up the set with mostly new material of the new album and some old ones. I did enjoy hearing Clare and the Bassist sing and harmonizing with Dave.

Playing this Thursday 9th October at The Glasshouse fom 8pm, $5 at the door.

The above track 'Shame' reminds me a little of Elvis Costello, but to quickly describe them without comparing he's a song writer who plays scuzzed out psychedelic alt folk songs. There's some more tunes over at ilike, which I haven't really used much of.

Big Day Out have announced there the official 1st announcement for act, from what I’ve work out the Melbourne lineup is starting to look like this…. Neil Young, The Living End, Sneaky Sound System, Pendulum, TV on the Radio, The Ting Tings, Cut Copy, Youth Group, Birds of Tokyo, Eddy Current Suppression Ring, Arctic Monkeys, The Prodigy, My Morning Jacket, Bullet for my Valentine, Simian Mobile Disco, Tiki Taane, Cog, The Grates and TZU.

Biggest disappointment about this coming Big Day Out is that the Headless Chickens will be playing New Zealand only.

BDO Melbourne will be on Australia Day, January 26, at the Flemington Racecourse. Tickets are $132 with a limit of 4 per person. www.bigdayout.com

Soundwave also made an announcement with there main acts…

The have some pre sale tickets at www.soundwavefestival.com but will be onsale in Melbourne town on Saturday 11 October 9am. And it being held Friday 27 February – Melbourne Showgrounds.

Although I was checking on the Pyramid Rock Festival in Phillip Island and has completely Sold Out.