Look I know that Cherry Rock is on today and it's been moved to the Palace(formally metro) but last Thursday it was closed and Saturday nite it was again. Last night they were meant to have the Raveonettes DJ'ing, but with a closer look it said 'Closed until further notice'. Then went to Ding Dong, to see if it had moved there, as there are some way connected, asked the bouncer and according to him 'Yes they are closed'. Does this mean that Cherry the home of Soul night and Rock Friday(I made that one up) has shut its doors??? Please I hope not!!! 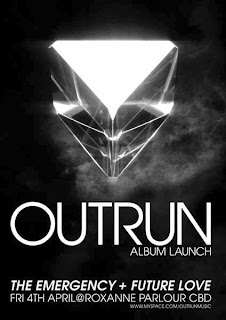 Can't remember Future Love, but did enjoy The Emergency. Plenty of people there to see Outrun, maybe the word is catching on. They have some great sounds, sometimes in between John Foxx and the new electronic which is happening, very dark and 80's computer games inspired.

JESUS AND MARY CHAIN with THE RAKES

Thurs. 3rd April 08
V Festival Present
JESUS AND MARY CHAIN(space) with THE RAKES(space) and Ghostwood(space)
The Palace (formally the Metro),
$80
$6 cans of VB served in a plastic cub???

Didn't get to see Ghostwood, so no comment. The Rakes were ok, had some good tracks, although the crowd were not interested. I heard a few people say behind me they were good. Play a guitar based indie pop tunes with a bit of a fresh sound, which seems strange as some people believe that Indie Brit Pop is dead.

J and MC play for about more than an hour, that's including the encore. There were a few people in the audience yelling stuff to them, sound though they were pissed off, maybe they didn't play there fav song that they heard when they had sex for the first time. I guess people invest alot of time and money in gigs and feel that the band owes them something. Compare to the last nights show (Hot Hot Heat & Modest Mouse) there seemed to be an older crowd a few more guys and some young hip kids who like to go to the gig dressed up like band or what they think the band is about. They played classics and maybe a couple of new ones (whats with people bagging new tracks), but I like how some tracks went to the next level live, and some tracks I don't liked seemed alot more interesting.

Enough crapping on. A picture of cup and links to come.

Labels: The Palace (formally the Metro)

Hot Hot Heat were a blast when I saw them back in the Espy back in 2003? (I think). They still have an edge but were not as Hot as last time.

Was not expecting anything from Modest Mouse, my mate reckons they are great live. Good sounds, but nothing there to hold me keep me interested. They do have a few good singles.

Still loving the New Palaces, it's really a new place, lets all say goodbye to the Metro. Hazar!!!

Labels: The Palace (formally the Metro)