"When it comes to catching a e band, knocks the harbour city into a cocked hat. "

This article goes in depth about why there is a lack of e venues in compared to . It definitely shocking to a city that can hold an Olympic games, struggles to create a e music culture. What shocked me about reading this article was that a pub could have a few hundred people could be watching a football game on a screen without a licence but if you have a lone acoustic act performing in front of a handful of people you need a licence. Makes me think, is a lucky place.

What do festivals share in common? Expensive food, drinks smelly toilets, people who are there to be seen and a mix bag of bands. Nothing much amiss here with the first Car park Festival (or the last). The Car Park festival was ran jointly with ’s and Meredith Music festival. But for some reason it all just felt like I was watching it all in a pub, I was hot and sweaty, pub there were no pots of draught.

Before turning up, one of my friends said “they said it has a unnatural amphitheatre”, but how does that work in a car park in the middle of three buildings? There was a dip that started down about half way down the car park, which provided good view of the bands for tall and small. Also was concerned about the sun, due to no shade until about and that sun and concrete create an enormous about of heat, which in fact was correct, it was bloody stinking hot. It didn’t start filling up with punters until 5.

Missed opportunities for this festival were that there were no merchandise stands (stubby holders would have done well) and expensive drinks. Who wants to buy a $5.50 can of VB when you can walk down the block and buy a $3 pot in an air-conditioned pub? Between the bands like many other people, I went out of the venue to buy food and drinks elsewhere and to enjoy air-conditioning, and even went to a cheap shop to by a stubby holder for $2. 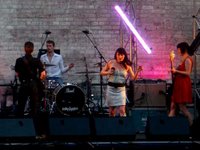 My highlights of the day were Billy Childish (what with his Amazon inspired website?), Architecture in (who said they were taking a break for a while), Sons & Daughters, and the first half of the Avalanches DJ set. After that there were only half the people left in the car park, maybe they had realized that DJ Dexta and James de la Cruz that aren’t in the lineup anymore. Also was a little disapointed that new kids on the block Airbourne (from country town Warrnambool) and Wolf Mother weren't there. On a positive note the hole thing finished at 10.10, so we all could go home a decent time (maybe I'm getting old).

Will we see another Carpark festival? Can't say, numbers didnt impress, it was too hot standing without any shade, so looks we'll have to wait till next year.