Cut Copy has just announced that they are touring with Franz Ferdinad in North America this Autumn, with also some headline shows. Also there is talk of a intimate pre Franz Ferdinad tour in Australia, so keep your ear to the streets, and there website.

SMOKE FREE SHOWS AT THE CORNER

The Corner has recently announced from December 2005 all shows will be smoke free. Plus a new bar and smoking area will be made upstairs. That should make things a bit cooler, instead of coming home smelling like smoke and beer, I'll just smell like beer. 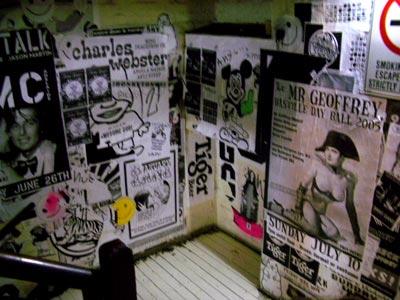 It was a late Thursday night at Honky Tonks, full of plenty of try hards and artists. The photo above was taken in the Stair well, leading up to the entertainment. It definitely has some of the best furniture and design for any nightclub I been to.
The reason why I went there was to see vocalist Bembe Segue. It didn’t start until 12.30ish, so we all dance to some soul at cherry around the corner. This was a live gig, with guitars, drums, keyboards, you could describe it as a modern freeform of Jazz (well that’s what I was told). I could exactly find much on the net about Bembe but here is what Ennio Styles from stylin had to say.

As the interview revealed, part of the reason for her unique rapid-syllable singing style comes from her background as a rapper.

Collaborations, she's had plenty: IG Culture, Nicola Conte, Ty, Mark de Clive-Lowe, 4 Hero, Bugz in the Attic, Alex Attias, Sleepwalker, Silhouette Brown, Da Lata, 2 Banks of Four and more. She assures us that her debut solo album is in the works, but given that she is using a 14-piece band, it's not proving a simple exercise.

This was an interesting live show, with a very intimate crowd. The crowd and the band were on the same level, with the crowd pushing ever so closer to the band. One other reason to visit honky tonks is the street art along the way. Unfortunately I didn’t get any photos of the gig due to the poor lighting.

The Go! Team at the Corner 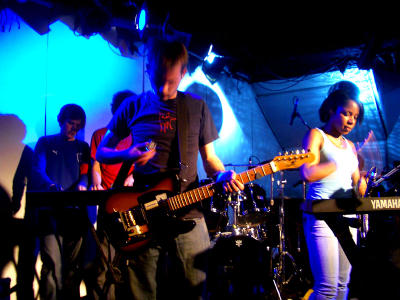 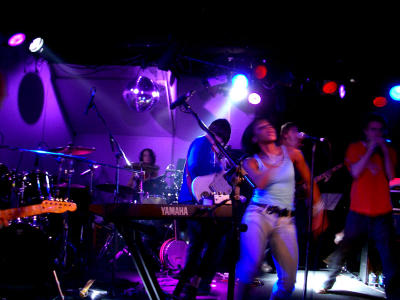 Mid State orange started the gig, they had an interesting sound but soon I was soon bored, they seemed a little flat. Then came The Grates which brought up the tempo for the evening and got everyone dancing. Well I didn’t, maybe because I feel a little old. I couldn’t believe the amount of energy that the lead singer has, she just kept on dancing around the stage, maybe on her imaginary trampoline. 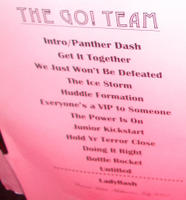 It didn’t take long before The Go! Team jumped onto the stage. I was amazed the size of the Go! Team on the small corner stage, but I have seen the Cat Empire play there and they have a horn section. There live sound is very different to there records and would be something hard to replicate, but still came across as a party band. The active band got the dance floor moving, with the exception to the guy on bass (A guy Stereolab standing in).
At the end of the gig I turned to my friends and said “They should have had a live horn section”. 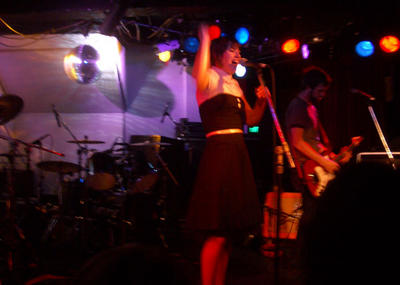